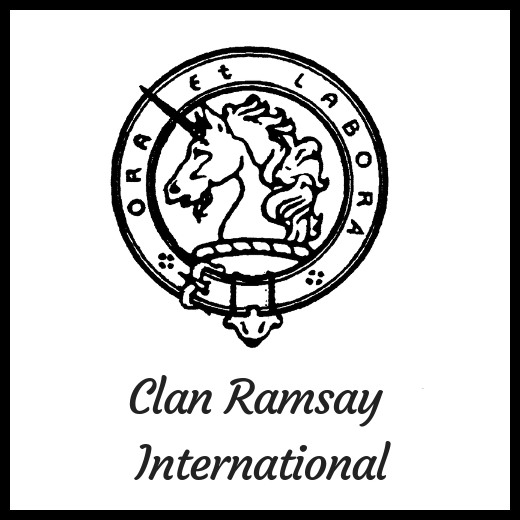 Clan Ramsay International (formerly the Clan Ramsay Association of North America) came into being in 1978 and has been thriving ever since. We meet annually at one of the Highland Games around the United States.

Clan chieftain: James Hubert Ramsay, 17th Earl of Dalhousie, represents two families: the Maules of Panmure in Angus and the Ramsays of Dalhousie in Midlothian.

Listen to the Clan Ramsay March:

To the top
CASTLES 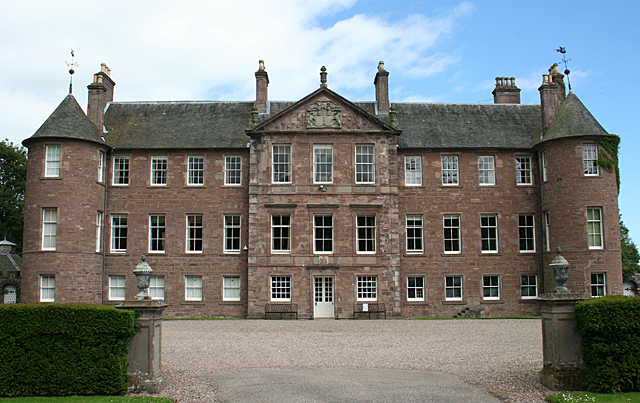 Brechin Castle is the seat of the Chieftain of Clans Ramsay and Maule and is steeped in history. In 1296 Edward I received the submission of King John Baliol of Scotland there and in 1303 Sir Thomas Maule defended the castle against the English for three weeks until his own death brought about its surrender. In 1643 Patrick Maule, 1st Earl of Panmure, bought the whole of the Brechin Estate from the Earl of Mar. The Castle was at that time a simple L-shaped house of three storeys. It was the 4th Earl of Panmure, married to Margaret daughter of the 3rd Duke of Hamilton, who eventually rebuilt the Castle as it is today. 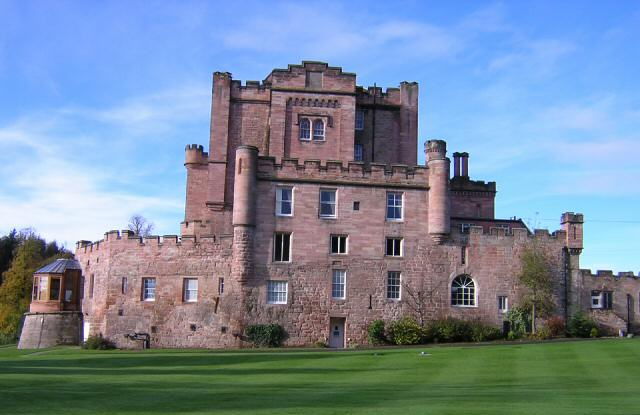 Dalhousie Castle in Midlothian is the traditional seat of Clan Ramsay. The Ramsays have retained possession of Dalhousie Castle longer than any family has retained possession of a castle in Scotland. The castle is located about eight miles south of Edinburgh on A7 at Bonnyrigg. The setting is a picturesque wooded area along the South Esk River in the parish of Cockpen. The original structure was built in the 13th century and the main parts of the present baronial mansion were constructed in 1450. The castle is of pink sandstone quarried from the opposite bank of the river and its roof is of solid lead. Dalhousie Castle, with its 15th century drum tower, closely resembled Direlton Castle, which is now in ruins. Only the Ramsays of Dalhousie may boast of possessing the oldest continuously inhabited castle in Scotland.

To the top
HISTORY

1140: First Appearance
The ancient family of Ramsay is of Anglo-Norman origin. Simundus de Ramesia, originally from Huntingdonshire in England, received lands in Lothian from David I. In 1140 he witnessed a charter to the monks at Holyrood. He was founder of the main line and the first Ramsay to acquire land at Dalwolsey.

13th Century: Witnessing Lothian Charters
William de Ramsay was witness to the Coldinghame Charter in 1198 and to another in 1236. His cousin, Sir Nessus de Ramsay, affixed his seal to a charter by Alexander II in 1217. Nicholas de Ramsay was witness to a charter between 1250 and 1270. William's son, also William de Ramsay, was a member of the Council of Magnates of the Realm in 1255 and in 1260. He too witnessed a charter. His son, Sir William Ramsay de Dalwolsey, signed the Ragman Roll in 1296, and joined the forces of Sir Robert Bruce at the battle of Bannockburn in 1314. He signed the Declaration of Arbroath in 1320 asserting the independence of Scotland from the Pope.

14th Century: Castles and Battles
Sir William had two sons, Sir Alexander Ramsay of Dalhousie and Sir William Ramsay of Inverieth. Sir Alexander, the elder son, was Warden of the Middle Marshes, in command of men of Lothian, and one of the Regent's chief commanders at Borough Muir, where England's ally, the Flemish Army, was defeated. He was present at the capture of Leuchars Castle, at St Andrews in 1335, and in June of 1338 he relieved Dunbar Castle and assisted the Countess of Dunbar in her struggle to maintain the stronghold against the English. His tragic end began in victory, when he and his party of men recaptured Roxburgh Castle from the English in 1342. The titular constable of the Castle, Sir William Douglas, had several times tried unsuccessfully to retake it. For his brave and heroic feat, Sir Alexander was appointed constable of Roxburgh and Sheriff of Teviotdale. Sir William Douglas was so outraged by the appointments that he sought revenge by capturing Sir Alexander and imprisoning him in the dungeon of Hermitage Castle where he was left to starve. Legend has it that he survived for seventeen days by eating small quantities of grain that fell through the cracks in the floor of the castle granary above the dungeon. His brother, Sir William Ramsay of Inverleith succeeded Sir Alexander at Dalhousie in 1342 and was famous for his raid around Norham Castle at the battle of Nesbitt Moor in 1355.

William Ramsay, 5th Earl of Dalhousie, was a military officer with the rank of Brigadier General and was sent to the assistance of Archduke Charles in the struggle for the crown of Spain in 1705. The Dalhousie line survived through William, 6th Earl, and Charles' brother, George, 8th Earl. As a result of the death of his maternal uncle, Earl of Panmure, George acquired the bulk of Maule estates with the remainder steeled upon his second son, William. In 1782 William assumed the name and arms Maule and was created Baron Panmure of Brechin and Navar.

19th Century: Ramsays spread with the Empire
The 9th Earl of Dalhousie, George Ramsay, was Lt. Governor of Nova Scotia and Governor of Canada from 1819 to 1828. The 9th Earl was created Baron Ramsay in 1815. He established Dalhousie University in Halifax, Canada. George's youngest son, James was appointed President of the Board of Trade at age 33. Three years later he became the youngest ever Governor-General of India. Unfortunately, tragedy took its toll on the Marguess. In 1853 his wife became severely ill while living in India. She died at sea on the return voyage to Scotland at the age of 38. This left James broken in spirit and in 1860 he died at the age of 48 without a male heir.

The title of Earl of Dalhousie was conferred upon the Marquess' cousin, Fox Maule. Fox, the 11th Earl, was the son of the 1st Baron Panmure and succeeded his father in 1852. Fox Maule assumed the name Maule Ramsay in 1861. In 1874, he died without issue whereby the Barony of Panmure became extinct. Fox Maule Ramsay was succeeded by his cousin George Ramsay, the 12th Earl of Dalhousie. His son, John William Ramsay, became the 13th Earl. John was Lord-in-Waiting in Ordinary to Queen Victoria from 1880 to 1885. After a prolonged tour through the United States, the Earl tragically died within twenty-four hours of his wife's death in 1887. The title passed to his nine-year-old son, Arthur George Maule Ramsay, the 14th Earl.

20th Century Honors
In 1928, John Gilbert Ramsay inherited the title of 15th Earl of Dalhousie. He died unmarried in 1950 and was succeeded by his brother, Simon Ramsay the 16th Earl of Dalhousie. He was Governor-General of the Federation of Rhodesia and Nyasaland from 1957 until 1963. He became Lord Chamberlain to the Queen Mother in 1965. In 1967, he became a Justice of the Peace and Lord Lieutenant of Angus, serving until 1989. He was a Lieutenant of the Royal Company of Archers (the Queen's bodyguard in Scotland) and was made a Knight of the Thistle by the Queen in 1971. From 1977 until 1992 he was Chancellor of Dundee University and in 1979 was appointed GCVO. He retired in 1992. He died July 15, 1999 and was succeeded by his son, James Ramsay, the 17th Earl of Dalhousie. The 17th Earl of Dalhousie is the Chief of the Clan Ramsay.

The Ramsays have not only contributed to the glories of Scotland, but also played prominent roles in establishing the United States and Canada. One of the earliest on record in America is Alexander Ramsay. Alexander settled on the Tugaloo River of South Carolina in about 1730. Many of his descendants still live in that area.

Capt. James Ramsay appears on a record in 1735 in Baltimore, Maryland. It is believed that his line extends back to a Scottish Sir James de Ramsay of Dalhousie. A Scottish merchant named William Ramsay founded the city of Alexandria, Virginia 1749. He belonged to the ancient house of Dalhousie and many of his descendants still live in Alexandria.

Both sons of James and Jane Montgomery Ramsay of Lancaster, Pennsylvania, proved to be exceptional men of character. Nathaniel, born in 1741, was an army officer and a Continental congressman from Maryland. He served at the Battle of Long Island in 1776 and at the Battle of Manmouth in 1778. His brother, David, born in 1749, was a Continental Congressman, physician and historian from South Carolina. David was later a three-term member of the South Carolina Senate.

In the Clerk's office in Norfolk, Virginia is the will of Dr. George Ramsay, dated June 22, 1756. It bears a seal with the arms of Ramsay along with the family motto, "Ora et Labora." William Gouverneur Ramsay was well-known in Wilmington, Delaware in the latter half of the 18th century. Major James Ramsey, an ancestor of President Harrison, owned the land where the town of Ligonier, Pennsylvania is now located. His son, John Ramsey, laid out the town in the late 1700's.

To reflect the increasing number of members from countries around the world, the organization adopted a new name — "Clan Ramsay International" on November 29, 2016.